The Latest About AMS

“The Great Resignation”: A Threat to Employers, or an Opportunity to Re-Think Employee Retention Strategies? 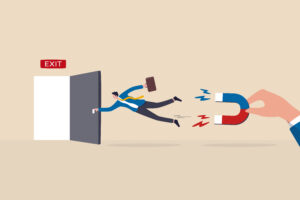 Over the past year it has becoming increasingly common to see the term “Great Resignation” used to describe the current labor market everywhere from TikTok to the daily news. However, what exactly does this term mean? Is it true that everyone is quitting? What does this mean for the future of your organization?

The “Great Resignation” refers to a recent phenomenon in which record numbers of workers are quitting their jobs and many businesses are struggling to keep adequate staffing levels. While this trend was first observed in early 2021, current surveys by Microsoft and McKinsey show that around 40% of US Workers are considering quitting their jobs over the next few months, so it is still a reality of the current labor market. While the term “resignation” does imply that people are quitting, most of them are staying within the labor force. There are some exceptions, with higher than usual retirement rates and some workers, especially caretakers, leaving the labor force permanently or temporarily. However, most people leaving their employment are doing so to find job opportunities elsewhere, either within their current industry or more often with another industry entirely. There is some debate over how impactful these job changes have truly been for workers. While many blue-collar workers changed industry, it was mostly white-collar workers who were able to bargain for increased benefits and salaries. Some surveys show that many workers were not as satisfied with their new opportunities as they had expected and may even regret the change. However, this ongoing trend does highlight that many workers feel unsatisfied with their current jobs and that their companies are failing to correct the underlying problems.

There is a mismatch between what companies think their employees value most and the benefits that workers are actually looking for. In an effort to keep workers, companies have been increasing wages and trying to improve benefits. While compensation is a top issue for workers, one of the primary reasons people are leaving the workforce is a lack of career progression. Of similar importance is uncaring or uninspiring leaders. Employees are now much less likely to stay with bad managers than they were before, even if they are paid more. As many people switching jobs now cite lack of meaningful work as a motivator, having a good boss that helps make the work feel worthwhile is more important than ever. Flexibility is now also a key issue for many workers, especially for those who may have increased caretaker demands or may be searching for non-traditional work models.

So, what can organizations do to retain their current workers? A key solution is to help managers support employees in growing beyond just their team. Talented individuals often stay on the same team or in the same position because they do great work, but this can prevent them from finding new opportunities for growth. Solutions such as focusing career conversations on progression, not just promotion can be a good way to discern what kind of growth opportunities employees may be looking for. Career experiments, such as shadowing other members of the company or trying out someone else’s job in a temporary capacity can also be great opportunities for employees. Another important step for an organization is to be regularly checking in on leadership. With high management turnover rates, driven in part by burnout and difficult working conditions, it is important that managers feel supported and that there is a good team balance. While times continue to be challenging in the labor force, employers and employees can improve their situations by being open and honest about expectations, opportunities, and what each side truly values.